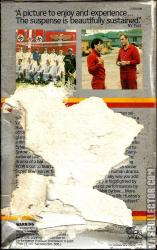 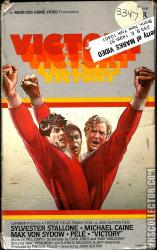 Additional Information
Now is the time for heroes.

John Huston directed this exciting World War II action film, which culminates in a rousing soccer game. In a German prisoner of war camp, Major Karl von Steiner (Max Von Sydow), the camp commander, once a member of the German national soccer team, decides to put together a soccer match between a team of Allied prisoners, led by Captain John Colby (Michael Caine), a former English international soccer player. The game is to be played in Colombes Stadium in Paris and exploited for maximum propaganda effect by the Nazi publicity machine. Robert Hatch (Sylvester Stallone) is enlisted to assist the Allied prisoners to train for the event. But, in fact, the Allies are planning a risky escape during the soccer match. Famed Brazilian soccer great Pele makes an appearance in the film, along with Bobby Moore, the captain of Britain's 1966 World Cup champions, and Argentine soccer star Osvaldo Ardiles

Escape to Victory, known simply as Victory in North America, is a 1981 film about Allied prisoners of war who are interned in a German prison camp during World War II who play an exhibition match of Association football against a German team. The film was directed by John Huston and stars Michael Caine, Sylvester Stallone, Max von Sydow and Daniel Massey.

Association football plays a central role of the film. A team of Allied prisoners of war (POWs), coached and led by English Captain John Colby (Michael Caine), a professional footballer for West Ham United before the war, agree to play an exhibition match against a German team, only to find themselves involved in a German propaganda stunt.

Colby is the captain and essentially the manager of the team and thus chooses his squad of players. American POW Hatch (Sylvester Stallone) is not initially chosen, but eventually nags the reluctant Colby into letting him on the team as the team's trainer. Hatch needs to be with the team to facilitate his upcoming escape attempt.

Colby's superior officers repeatedly try to convince Colby to use the match as an opportunity for an escape attempt, but Colby consistently refuses, fearing that such an attempt will only result in getting his players killed. Meanwhile, Hatch has been planning his unrelated escape attempt, and Colby's superiors agree to help him, if he in return agrees to journey to Paris, make contact with the French Resistance, and try to convince them to help the soccer team escape.

Hatch succeeds in escaping the prison camp, traveling to Paris, and finding the Resistance, at first, the Resistance decides that the plan to help the football team escape is too risky; but once they realise the game will be at the Colombes Stadium they plan the escape using a tunnel from the Paris sewer system to their showers in the players' changing room. They convince Hatch to let himself be re-captured, so he can pass information along back to the leading British officers at the prison camp.

Hatch gets recaptured and is put in solitary confinement. Because he is in solitary confinement, the prisoners don't know whether an escape has been planned with the underground so Colby tells the Germans that he needs Hatch on the team because Hatch is the backup goalkeeper and the starting goalkeeper has broken his arm. Colby actually has to break the existing goalkeeper's arm because the Germans want proof of his injury before they will agree to let Hatch onto the team.

In the end, the POWs can leave the German camp only to play the match; they are to be imprisoned again following the match. The resistance's tunnelers break through to the showers in the dressing room at halftime (in an escape led by Hatch) but the rest of the team (led by Russell Osman saying "but we can win this") want to persuade him to carry on with the game, despite being behind 4-1 at halftime.

Despite the match officials being heavily biased towards the Germans, and the German team causing several deliberate injuries to the Allied players, a draw is achieved after great performances from Luis Fernandez (portrayed by Pelé), Carlos Rey (portrayed by Osvaldo Ardiles) and Arthur Hayes (portrayed by John Wark). Hatch plays goalkeeper, and makes excellent saves including one last save from a penalty kick as time expires to deny the Germans the win, drawing the game 4–4. Before the penalty kick the POWs had scored a goal which was disallowed by the referee for a dubious offside decision, making the score 5–4, prompting the crowd to shout "Victoire!"

They manage to escape at the end of the game, amidst the confusion caused by the crowd storming the field after Hatch preserves the draw.