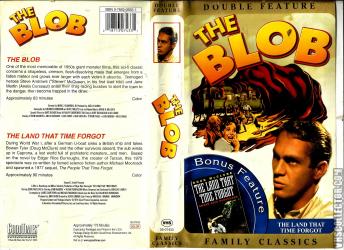 Additional Information
Beware of the Blob! It creeps, and leaps, and glides and slides across the floor.
Indescribable... Indestructible! Nothing Can Stop It!

The indestructible creature! Bloated with the blood of its victims!


In his first starring role, Steve McQueen plays a typical oversexed, car-lovin' highschooler who can't get anyone to believe his story about a huge meteor, which crashes to earth and begins exuding a pink, gooey substance. Affixing itself to the body of an old man, the "blob" begins parasitically sucking the life out of several unfortunate humans, growing to an enormous size. Problem is, the disappearances of the victims can all be explained (one is supposed to be out of town, another is attending a convention), so the cops still won't believe McQueen or his girlfriend Aneta Corsaut (the future Helen Crump of The Andy Griffith Show). Rallying his teen pals, McQueen finally manages to get the adults' attention-but by now, the Blob is consuming entire city blocks. In 1972, the sequel Beware the Blob followed. ~

Since 2000, the town of Phoenixville, Pennsylvania – one of the filming locations – has held an annual "Blobfest". Activities include a re-enactment of the scene in which moviegoers run screaming from the town's Colonial Theatre, which has recently been restored.[9] Chef's Diner in Downingtown is also restored, and is open for business or photographs of the basement on weekday mornings only.
The Blob itself was made from silicone, with increasing amounts of red vegetable dye added as it "absorbed" people. In 1965, it was bought by movie collector Wes Shank,[10] who has written a book about the making of The Blob.[11]
According to Jeff Sharlet in his book The Family, The Blob was "about the creeping horrors of communism" only defeated "by freezing it – the Cold War writ small and literal."[12] Rudy Nelson, one of the scriptwriters for the film, has denied many of Sharlet's assertions, saying "What on earth can Sharlet say about the movie that will fill 23 pages – especially when what he thinks he knows is all wrong?

THE ADVENTURE YOU WILL NEVER FORGET!

Journey to a savage world where time is extinct!


In this low budget fantasy adventure from Britain, based on Edgar Rice Burroughs' 1918 science fiction novel, a German submarine holding American prisoners of war during World War I, veers off course. Lost at sea, the submarine empties its fuel supply and runs aground on an uncharted island in the Antarctic. The survivors find that the island contains an ancient oil refinery that can be used to fuel the submarine. The only problem is that the group of Germans and Americans have to battle gigantic dinosaurs and primitive cavemen as they make their way through the island. The Land That Time Forgot was enough of a success to spawn a 1976 sequel called The People That Time Forgot.


The Land That Time Forgot is a 1975 fantasy/adventure film based upon the 1924 novel The Land That Time Forgot by Edgar Rice Burroughs. The screenplay was written by Michael Moorcock. The film was produced by Britain's Amicus Productions and directed by Kevin Connor. The cast included Doug McClure, John McEnery, Keith Barron, Susan Penhaligon, Anthony Ainley and Declan Mulholland.

Catalog Number
3025 (B)
Primary Distributor (If not listed, select "OTHER")
Video Gems
1981BETACLAMUnited States
Packaging Back

Catalog Number
3025 (A)
Primary Distributor (If not listed, select "OTHER")
Video Gems
1981VHSCLAMUnited States
Packaging Back