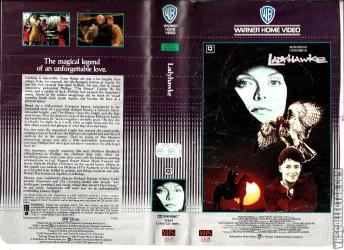 
In medieval France, knight Rutger Hauer and lady fair Michelle Pfeiffer both run afoul of evil-bishop John Wood. Through the auspices of bishop's confessor Leo McKern, Hauer and Pfeiffer are placed under a curse. During the night, Hauer takes the form of a wolf, while Pfeiffer assumes the form of a hawk by day. The two lovers can only meet one another as humans at dawn and dusk. The only mortal in a position to rescue Hauer and Pfeiffer from their fate is nebbishy pickpocket Matthew Broderick, who acts as liaison between the lovers. With the help of the guilt-ridden McKern--and a convenient solar eclipse--Broderick endeavors to set things aright.


A thief called "The Mouse" escapes the dungeons of medieval Aquila, setting in motion a chain of events that may save or destroy a beautiful woman and a brave captain. The two lovers are doomed to lifelong separation by a demonic curse invoked by the corrupt and jealous Bishop of Aquila: by day Isabeau is transformed into a hawk, while at night Navarre becomes a wolf. Imperius, the monk who betrayed them, has found a way to break the curse, but only if he and the Mouse can get them back into Aquila to face the Bishop.

Ladyhawke has a rating of 67% on Rotten Tomatoes, based on 18 critics' reviews, indicating a fairly positive critical reception.[3] Vincent Canby in the New York Times called the film "divided against itself," and went on to say that "scenes of high adventure or of visual splendor... are spliced between other scenes with dialogue of a banality that recalls the famous Tony Curtis line, 'Yondah lies my faddah's castle.'"[4] Time Out called it "all rather facile sword-and-sorcery stuff, of course, but at times very funny... and always beautifully photographed."[5] Variety described the film as a "very likeable, very well-made fairytale... worthwhile for its extremely authentic look alone."[6]
The New York Times singled out Matthew Broderick's skill in coming "very close to transforming contemporary wisecracks – particularly, his asides to God – into a more ageless kind of comedy," and said of Michelle Pfeiffer that her "presence, both ethereal and erotic, is so vivid that even when she's represented as a hawk, she still seems to be on the screen." Variety praised the casting of the lead actors, considering Pfeiffer "perfect as the enchanting beauty." Time Out called Rutger Hauer "camp" and Pfeiffer "decorative."
Andrew Powell's score has been widely criticised as "dated" in the years since the film's release; Rob Vaux of Flipside Movie Emporium described it as the "worst soundtrack ever composed."