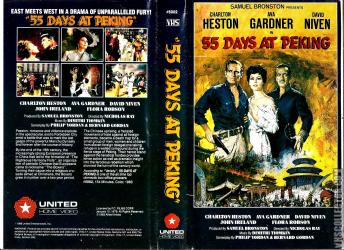 Additional Information
A handful of men and women held out against the frenzied hordes of bloodthirsty fanatics!

Samuel Bronston produced this extravagant blockbuster, shot in Super Technirama 70. Nominally directed by Nicholas Ray (who makes a brief appearance as the U.S. ambassador), Ray was taken off the film and replaced by the more pliable directorial touches of Andrew Marton. Charlton Heston stars as Maj. Matt Lewis, the leader of an army of multinational soldiers who head to Peking during the infamous Boxer Rebellion of 1900. As the film unfolds, the foreign embassies in Peking are being held in a grip of terror as the Boxers set about massacring Christians in an anti-Christian nationalistic fever. Inside the besieged compound, the finicky British ambassador (David Niven) gathers the beleaguered ambassadors into a defensive formation. Included in the group of high-level dignitaries is a sultry Russian Baroness (Ava Gardner) who takes a shine to Lewis upon his arrival at the embassy compound with his group of soldiers. As Lewis and the group conserve food and water and try to save some hungry children, they await the arrival of expected reinforcements, but the tricky Chinese Empress Tzu Hsi (Flora Robson) is, in the meantime, plotting with the Boxers to break the siege at the compound with the aid of Chinese recruits.

55 Days at Peking is a 1963 historical epic film starring Charlton Heston, Ava Gardner, and David Niven, made by Samuel Bronston Productions, and released by Allied Artists. The movie was produced by Samuel Bronston and directed by Nicholas Ray, Andrew Marton (credited as second unit director), and Guy Green (uncredited). The screenplay was written by Philip Yordan, Bernard Gordon, Ben Barzman, and Robert Hamer, the music score was written by Dimitri Tiomkin, and the cinematographer was Jack Hildyard.
In addition to directing, Nicholas Ray plays the minor role of the head of the American diplomatic mission in China. This film is also the first known appearance of future martial arts film star Yuen Siu Tien. Japanese film director Juzo Itami, credited in the film as "Ichizo Itami", appears as Colonel Goro Shiba.

55 Days at Peking was a commercial disaster. Produced on an then-enormous budget of $17 million,[1] the film grossed $10 million,[2] earning only $5 million in theatrical rentals.[4] It was the 20th highest grossing film of 1963
Related Links
Variety
TCM Article
Facts About Film
Video Clip: Trailer