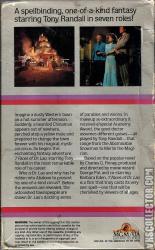 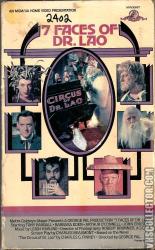 Additional Information
All Tony - All Terrific!

Which face will the wily doctor reveal to you?


Tony Randall has the showcase of a lifetime in the marvelous George Pal production The Seven Faces of Dr. Lao. We first see Randall as Dr. Lao, an enigmatic Chinese medicine-show impresario. The doctor brings his travelling show into the frontier town of Abalone, which is chafing under the oppression of land-hungry Clint Stark (Arthur O'Connell). Newspaper editor Ed Cunningham (John Ericson) is conducting a campaign of words against Stark, but he is no match for the land baron's money, power, and hulking henchmen. Nonetheless, Cunningham continues his crusade, all the while attempting to romance icy young widow Angela Benedict (Barbara Eden). All of this is observed with bemusement by Dr. Lao, who has already established himself as a man of many talents by alternating between pidgin-English and eloquent articulation, depending on the circumstances. Each of the townspeople--including the three already mentioned--learn a great many truths about themselves when they attend Dr. Lao's unusual circus. In the course of straightening out everyone's problems, Lao metamorphoses into (1) Merlin the Magician, (2) Pan, (3) Medusa, (4) The Abominable Snowman, (5) Apollonius of Tyana and (6) a Talking Serpent. The combined talents of Randall, puppeteer Pal and make-up wizard William J. Tuttle (who won two Special Oscars) resulted in this captivatingly unique entertainment experience. Curiously, Tony Randall is not fond of Seven Faces of Dr.Lao, and refuses to be interviewed on the subject. Perhaps he was unhappy that much of the philosophy dispensed in the original Charles G. Finney novel The Circus of Dr. Lao was weeded out of Charles Beaumont's script....or perhaps he just didn't like having his head shaved for the part.


According to notes on the Leigh Harline soundtrack CD released by Film Score Monthly, Pal's first choice for the role was Peter Sellers who was strongly interested in the role. MGM decided that they wished an American in the lead role.
William Tuttle received an honorary Oscar for his makeup work on this film. It was the first of only two honorary Oscars awarded for makeup; the other went to John Chambers in 1968 for Planet of the Apes. As part of Tuttle's work, Randall had his head shaved, not only to play the bald Dr. Lao, but also to make it convenient for the "appliances" he had to wear. Randall later said, "It gave me an unborn look." The studio publicity department arrived at the barber too late to photograph the process, so they had a make-up artist glue hair back on Randall's head and the barber once again removed it, this time for the cameras. Randall makes a cameo appearance in the film, sans makeup, during the parade of cast members before the Woldercan sequence, sitting in the audience. Since his head was already shaved, makeup artist Tuttle applied a hairpiece to him. Randall later said in an interview, "Gene Kelly's old toupee came in handy."
Jim Danforth's model animation of the Loch Ness Monster, the Giant Serpent, Medusa's snake hair were nominated for an Academy Award.
The "Woldercan spectacular" that Dr. Lao presents as the grand finale of his circus contains much footage from an earlier George Pal production, 1961's Atlantis, the Lost Continent as well as some footage of flowing lava from The Time Machine and stock footage of destruction from MGM's 1951 production of Quo Vadis.
The crystal ball and large hourglass used by the Wicked Witch of the West in 1939's The Wizard of Oz can both be spotted in the film. Also, in the scene where Mike visits Lao at night, a two-headed tortoise can be seen; this made a few later appearances in the television series The Addams Family.