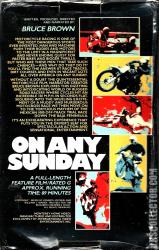 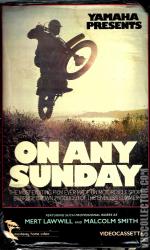 Additional Information
Motorcycle sport and the men who ride.


With narration by co-producer Steve McQueen (who also races in some of its segments), director Bruce Brown (best-known for his poetic surfing documentary, Endless Summer) takes us into the incredibly varied and physically demanding world of motorcycle racing. Shot during a two-year period and edited from over 150 hours of footage, the film sets a new standard in motorcycle racing photography, and the film's action is enhanced by Dominic Frontiere's musical score. Along with other types of racing, Moto-Cross racing from the wilds of northern Canada (where wheels have two-inch steel spikes for traction in ice) to the Mojave desert is shown. While some European motorcycle racing is shown, such as the English Trials, most of the film concentrates on the American racing scene. Footage of the day-to-day life of McQueen, sportsman Malcom Smith and champion Mert Lawwill, as they participate in the racing circuit, helps to tie the film together.

On Any Sunday is a 1971 American documentary feature about motorcycle sport, directed by Bruce Brown. It was nominated for a 1972 Academy Award for Documentary Feature. [1]

This documentary follows the lives of motorcycle racers and racing enthusiasts. Brown tried to show the unique talents needed for the different forms of racing. For instance, the motocross riders were typically free-spirited types, while desert racers were often loners. In Grand National racing, Brown showed the differing personalities, such as the business-like approach to racing displayed by Mert Lawwill versus the carefree approach that wild young rookie David Aldana became known for.[2]

Steve McQueen is featured in the film, along with Mert Lawwill, Malcolm Smith and many other motorcycle racers from the late 1960s and early 1970s.

From a historical perspective, the motorcycles featured in the film include Triumph, Husqvarna, Harley Davidson, Honda, Yamaha, Suzuki, and other manufacturers that are still in business or gone by the wayside such as BSA, Bultaco, and Hodaka.