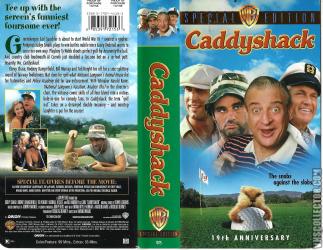 Additional Information
At last, a comedy that bites!
Some People Just Don't Belong.

The Snobs Against The Slobs!

Playing A Round Of Golf At The Bushwood Club Isn't Just Confined To The Golf Course!

At last, a comedy with balls!

The smash success Caddyshack became a prototype for countless other wacky T&A-tinged teen comedies of the early 1980s. At an exclusive country club for WASPish snobs, an ambitious young caddy (Michael O'Keefe) from an overpopulated home eagerly pursues a caddy scholarship in hopes of attending college and, in turn, avoiding a job at the lumber yard. In order to succeed, he must first win the favor of the elitist Judge Smails (Ted Knight), then the caddy golf tournament which the good judge sponsors. Of course, there are love interests as well -- one good, one naughty -- not to mention several foes he must vanquish along the way. The story itself serves to string along a series of slapstick scenes involving an obnoxious nouveau riche land developer (Rodney Dangerfield) who wants to turn the site into a condominium community; an oddball, Zen-quoting, millionaire slacker/golf ace (Chevy Chase); and a psychotic groundskeeper (Bill Murray) with a gopher-fixation. Caddyshack was a bona fide hit; throughout the '80s and '90s, director Harold Ramis would continue to create such hits as Ghostbusters, Groundhog Day, and Analyze This.


Caddyshack is a 1980 American sports comedy film directed by Harold Ramis and written by Brian Doyle-Murray, Ramis and Douglas Kenney. It stars Chevy Chase, Rodney Dangerfield, Ted Knight, and Bill Murray. Doyle-Murray also has a supporting role.
This was Ramis' first feature film and was a major boost to Dangerfield's film career; previously, he was known mostly for his stand-up comedy. Grossing nearly $40 million at the domestic box office (17th highest of the year),[1] it was the first of a series of similar comedies. A sequel, Caddyshack II, followed in 1988, although it was not nearly as successful or well received.
The film has garnered a large cult following and has been hailed by many publications, such as Time and ESPN, as one of the funniest sports movies of all time. As of 2010, Caddyshack has been televised on the Golf Channel as one of its "Movies That Make the Cut".