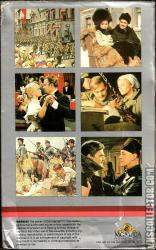 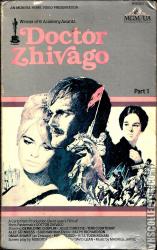 Additional Information
The entertainment event of the year!

A Love Caught in the Fire of Revolution

Turbulent were the times and fiery was the love story of Zhivago, his wife and the passionate, tender Lara.

Based on the Nobel Prize-winning novel by Boris Pasternak, Doctor Zhivago covers the years prior to, during, and after the Russian Revolution, as seen through the eyes of poet/physician Yuri Zhivago (Omar Sharif). In the tradition of Russian novels, a multitude of characters and subplots intertwine within the film's 197 minutes (plus intermission). Zhivago is married to Tonya (Geraldine Chaplin), but carries on an affair with Lara (Julie Christie), who has been raped by ruthless politician Komarovsky (Rod Steiger). Meanwhile, Zhivago's half-brother Yevgraf (Alec Guinness) and the mysterious, revenge-seeking Strelnikoff (Tom Courteney) represent the "good" and "bad" elements of the Bolshevik revolution. Composer Maurice Jarre received one of Doctor Zhivago's five Oscars, with the others going to screenwriter Robert Bolt, cinematographer Freddie Young, art directors John Box and Terry Marsh, set decorator Dario Simoni, and costumer Phyllis Dalton. The best picture Oscar, however, went to The Sound of Music.

Doctor Zhivago is a British 1965 epic drama–romance film directed by David Lean, starring Omar Sharif and Julie Christie. The film is loosely based on the famous novel of the same name by Boris Pasternak. It has remained popular for decades and as of 2014 is the eighth highest-grossing film of all time, adjusted for inflation.[1]

The film was entered into the 1966 Cannes Film Festival.[7]

Despite being a spectacular box office hit, Doctor Zhivago received mixed reviews at the time of its release. It was criticised for its length and overly romantic depiction of the affair between Zhivago and Lara. Film critic Roger Ebert, while liking the film, said of Doctor Zhivago that "it lumbers noisily from nowhere to nowhere", and that Omar Sharif's performance was "soulful but bewildered". In general, the film's critics have found Doctor Zhivago too overly romantic and almost at the level of soap opera, with the (in their view) syrupy Lara's Theme at the top of their complaints. (The song was a major hit when it was released on record.)

Bosley Crowther of the New York Times said that Zhivago and Lara are "possessed by a strange passivity".[2] Sometimes those same critics who found the length of the film overbearing also found the depiction of historical events too facile.

The final scene, in which a rainbow appears over a dam as the final credits were rolled onscreen, was criticized as being "pro-Soviet" by more conservative critics, who felt it was signifying that the Soviet Union had a bright future. Screenwriter Robert Bolt, who adapted the novel, was a one-time member of the British Communist Party (leaving the Party in 1947[8] ) and well-known leftist who was prominent in the nuclear disarmament campaign, itself seen as a surrogate of the Cold War struggle between the West and the Soviet Bloc.[9] Since director David Lean was apolitical, the shot likely was created due to the beauty of its image, not as political symbolism. (Director of Photography Freddie Young won an Academy Award for his color cinematography.)[10]

On the plus side, most critics acknowledge that film addresses such grand themes as a dramatic period in world history, the ascendance of life over death, the struggle of the individual against the state, the triumph of the heart over the mind, and the way good intentions can go terribly wrong. One of the strongest points of Doctor Zhivago is the startling visuals, with Bosley Crowther calling the photography "brilliant, tasteful, and exquisite as any ever put on the screen.[2] Rod Steiger's role as Victor Komarovski is a memorable acting tour de force.

Though the film takes the viewpoint of the dreamy poet Zhivago, the physician side of Zhivago is rarely in evidence. Critics also carped that the film, unlike the book, was shorn of the actual poetry that was in a supplement at the end of the novel, and that showing a writer at work was inherently boring. Zhivago writes poems for Lara near the end of their relationship, but the poems are never heard by the audience.

The film left an indelible mark on popular culture and fashion, and to this day remains an extremely popular film: Maurice Jarre's score—particularly "Lara's Theme"—became one of the most famous in cinematic history. Over the years, the film's critical reputation has gained in stature, and today Doctor Zhivago is considered to be one of Lean's finest works and is highly critically acclaimed, along with Lawrence of Arabia, Brief Encounter, The Bridge on the River Kwai, and A Passage to India.

As with the novel itself, the film was banned in the Soviet Union. It was not shown in Russia until 1994.