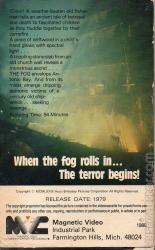 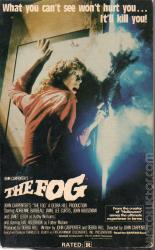 Additional Information
What you can't see won't hurt you... it'll kill you!
Lock your doors. Bolt your windows. There's something in The Fog!
When the fog rolls in... the terror begins!
It is night. It is cold. It is coming.


The Fog (also known as John Carpenter's The Fog) is a 1980 American horror film directed by John Carpenter, who also co-wrote the screenplay and created the music for the film. It stars Adrienne Barbeau, Jamie Lee Curtis, Tom Atkins, Janet Leigh and Hal Holbrook. It tells the story of a strange, glowing fog that sweeps in over a small coastal town in California, bringing with it the vengeful ghosts of mariners who were killed in a shipwreck there exactly 100 years before.
The Fog was Carpenter's first theatrical film after the success of his 1978 horror film Halloween, which also starred Jamie Lee Curtis. Although initially given mixed reviews, the film has gained a positive reception in later years and has achieved a cult following years since its release. A remake of the film was made in 2005.
John Carpenter, who startled the world with "Halloween", now brings you the ultimate experience in terror.

In addition to the final $1.1 million production budget, Avco Embassy spent over $3 million solely on advertising which included TV spots, radio spots, print ads, and even the placement of fog machines (costing £350 each) in the lobbies of selected theaters where the film was showing. A further undisclosed amount was spent on 600 prints of the film, 540 of which were distributed to American cinemas. Originally, the film was set for release during the 1979 Christmas season, but Avco Embassy president Bob Rehme opted to wait until February 1980 when there would be less major box office competition from other films and more theater screens available. The film had a staggered release in various cities beginning February 1st before expanding to further locations later that month
Related Links
HBO Promo

Catalog Number
90252
Primary Distributor (If not listed, select "OTHER")
Cel
1989VHSCLAMAustralia
Packaging Front, Spine and Back - OR - Square Packaging Front