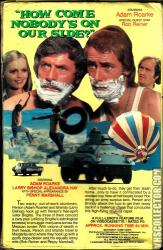 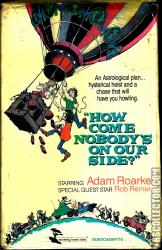 How Come Nobody's On Our Side ?

Richard Michaels, who directed over 30 made-for-TV movies as well as episodes of The Brady Bunch and Love, American Style, gives an overly small-screen feel to this self-described "high-flying comedy caper" which remains hopelessly earthbound. Biker-movie refugees Adam Roarke and Larry Bishop (Joey's son) star as -- not surprisingly -- a pair of actors sick of making biker movies and yearning to add some excitement to their lives. Stealing some motorcycles, they hit the road in character (stopping along the way to attend a screening of The Savage Seven, in which both actors actually appeared) for a series of uninteresting adventures. They get in fights, are ridiculed by real bikers, and eventually masquerade as policemen to smuggle marijuana over the Mexican border.

A couple of struggling actors who spend most of their time doing nothing come up with an idea for committing the perfect crime using astrology.