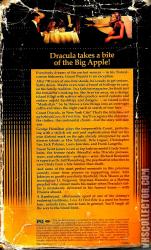 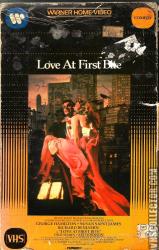 Additional Information
Your favorite pain in the neck is about to bite your funny bone!


George Hamilton confounded his detractors by turning in a first-rate comic performance in Love at First Bite. Hamilton plays Count Dracula, who is evicted from his Transylvanian domicile when the Communist government decides to nationalize his castle. With faithful toady Renfield (Arte Johnson) at his side, Dracula heads for the Big Apple, where he finds the vampire pickings radically different from those on his home turf: for example, ol' Drac suffers the mother of all hangovers when his sinks his fangs into the neck of a wino. Klutzy Cindy Sondheim (Susan Saint James) falls in love with Dracula, not fully aware of his colorful background. But Cindy's stuffy fiance Dr. Jeff Rosenberg (Richard Benjamin), a descendant of Dracula's perennial foe Professor Van Helsing, knows what Dracula's up to and does his best to thwart the vampire's plan. This proves very difficult, since such time-honored remedies as the stake through the heart are frowned upon by the New York City authorities. So successful was Love at First Bite that Hamilton was encouraged to have a satiric go at another literary icon in 1982's Zorro, the Gay Blade.The infamous vampire Count Dracula is expelled from his castle by the Communist government of Romania, which plans to convert the structure into a training facility for gymnasts (the head trainer declares that it will include Nadia Comăneci). The world-weary Count travels to New York City with his bug-eating manservant, Renfield, and establishes himself in a hotel, but only after a mix-up at the airport causes his coffin to be accidentally sent to be the centerpiece in a funeral at a black church in Harlem. While Dracula learns that America contains such wonders as blood banks, he also proceeds to suffer the general ego-crushing that comes from modern life in the Big Apple as he romantically pursues flaky fashion model Cindy Sondheim, whom he has admired from afar and believes to be the current reincarnation of his true love (an earlier being named Mina Harker).
Dracula is ineptly pursued in turn by Sondheim's psychiatrist and quasi-boyfriend Jeffrey Rosenberg. Jeffrey is the grandson of Dracula's old nemesis Fritz (sic) van Helsing but changed his name to Rosenberg "for professional reasons". Rosenberg's numerous methods to combat Dracula - mirrors, garlic, a Star of David (which he uses instead of the cross), and hypnosis - are easily averted by the Count. Rosenberg also tries burning Dracula's coffin with the vampire still inside, but is arrested by hotel security. Subsequently he tries to shoot him with three silver bullets, but Dracula remains unscathed, patiently explaining that this works only on werewolves. Rosenberg's increasingly erratic actions eventually cause him to be locked up as a lunatic, but as mysterious cases of blood-bank robberies and vampiric attacks begin to spread, NYPD Lieutenant Ferguson starts to believe the psychiatrist's claims and gets him released.
In the end, as a major blackout hits the city, Dracula flees via taxi cab back to the airport with Cindy, pursued by Rosenberg and Ferguson. The coffin is accidentally sent to Jamaica instead of London and the couple miss their plane. On the runway, Cindy finally agrees to become Dracula's vampire bride. Rosenberg attempts to stake Dracula, but as he moves in for the kill, the two fly off as bats together. A check drops down by which Cindy pays off her (enormous) psychiatry bill to Rosenberg, to which he remarks: "She has become a responsible person ... or whatever." Rosenberg keeps Dracula's cape - the only thing his stake had hit - which Ferguson borrows, hoping (since the cape makes the wearer look stylish) it will help him on his wedding anniversary. The last scene shows Dracula and Cindy, transformed into bats, on their way to Jamaica.

The film was a financial success, earning about $43 million[2] and ranking at 13th place on a list of the top grossing films of 1979. In fact, it was one of the highest grossing independent films of all time for many years. However, critical reviews were mixed, and Love at First Bite has a 67% "fresh" rating on review aggregator site Rotten Tomatoes, based on 21 reviews.[3] As quoted by Rotten Tomatoes, Janet Maslin described Love as "[a] coarse, delightful little movie with a bang-up cast and no pretensions at all," while Dave Kehr lamented the film's "hodgepodge of flat one-liners and graceless slapstick."