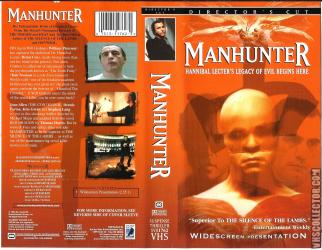 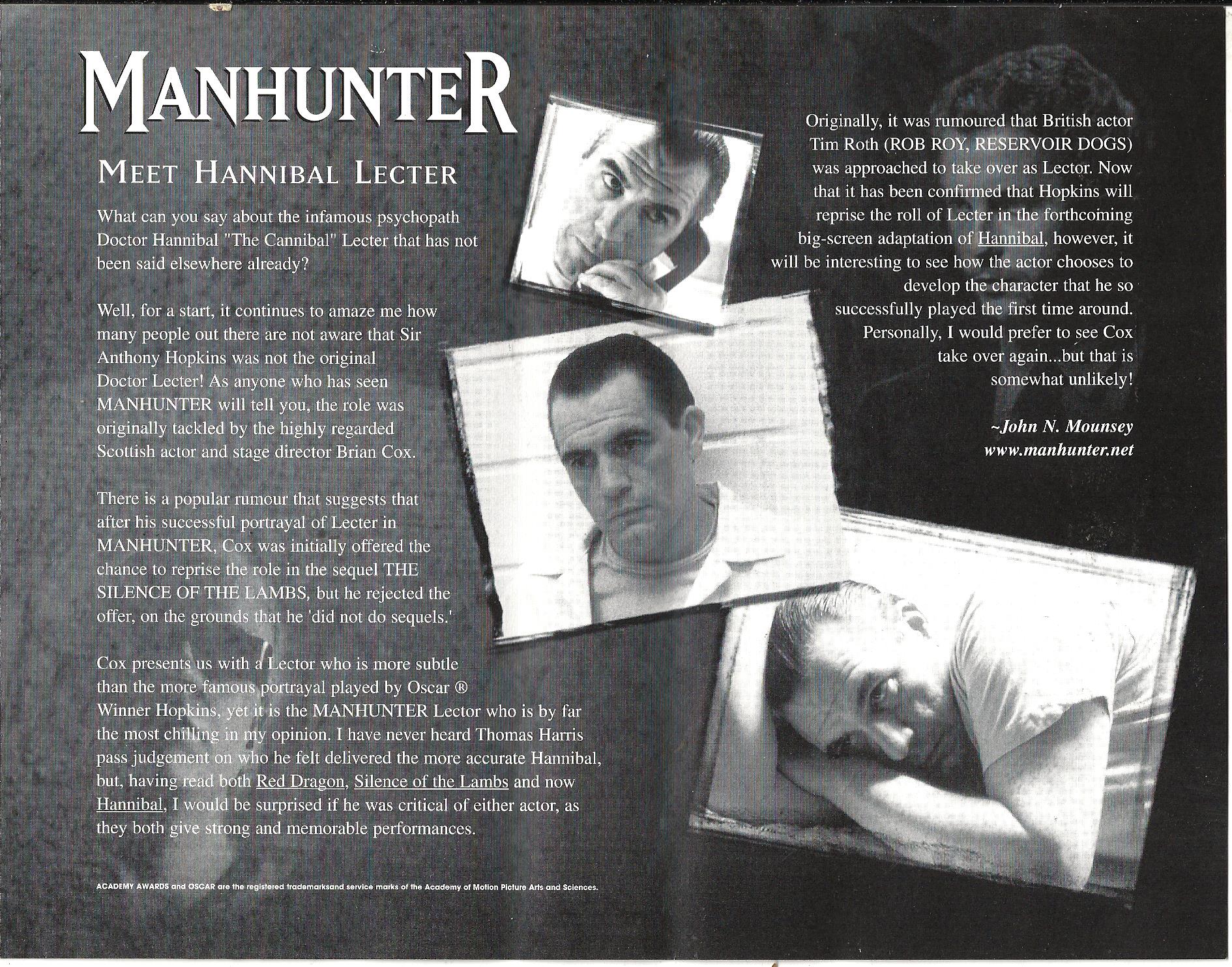 Additional Information
Enter the mind of a serial killer... you may never come back.


Red Dragon, the Thomas Harris novel that introduced serial killer Hannibal Lecter to the world, was adapted for the screen by Michael Mann as Manhunter. Ace criminal profiler Will Graham (William Petersen) is very good at his job because he has the ability to make himself think like the killers he tracks. Will has been in retirement since catching Hannibal "the Cannibal" Lecter (Brian Cox), as being inside that particular deranged mind caused Will to have a breakdown. Will's boss Jack Crawford (Dennis Farina visits Will at his home, showing him pictures from a murder scene and asking for his help in catching a new killer they have dubbed "the Tooth Fairy" (Tom Noonan). In order to test his mental strength, Will visits Hannibal in his prison cell. Adding to the already substantial mental stress Will experiences when he returns to the job are nosy tabloid reporter Freddy Lounds (Stephen Lang), as well as Hannibal's attempts at seeking revenge through the Tooth Fairy. After two additional films that featured Anthony Hopkins as Hannibal Lecter (Silence of the Lambs and Hannibal) became box-office blockbusters, Manhunter was re-made as Red Dragon starring Hopkins and Edward Norton as Will Graham. ~


Manhunter is a 1986 American thriller film based on Thomas Harris's novel Red Dragon. Written and directed by Michael Mann, it stars William Petersen as Will Graham and features Brian Cox as Hannibal Lecktor. When asked to investigate a killer known as "The Tooth Fairy", FBI profiler Will Graham comes out of retirement to lend his talents to the case, but in doing so he must confront the specter of his past and meet with a jailed killer who nearly counted Graham amongst his victims. Dennis Farina co-stars as Jack Crawford, Graham's superior at the FBI, and serial killer Francis Dollarhyde—"The Tooth Fairy"—is portrayed by Tom Noonan.
Manhunter focuses on the forensic work carried out by the FBI to track down the killer and shows the long-term effects that cases like this have on Graham, highlighting the similarities between him and his quarry. The film features heavily stylized use of color to convey this sense of duality, and the nature of the characters' similarity has been explored in academic readings of the film. This was not the first adaptation of a Harris novel for the screen—the 1975 novel Black Sunday, a story of a terrorist attack on the Super Bowl, was made into a film in 1977—but it was the first film to feature serial killer Hannibal Lecter, who would later appear in The Silence of the Lambs, Hannibal, Red Dragon, Hannibal Rising, and the 2013 television series Hannibal.
Opening to mixed reviews, Manhunter fared poorly at the box office at the time of its release, making only $8.6 million in the United States. However, it has been reappraised in more recent reviews and now enjoys a more favorable reception, as both the acting and the stylized visuals have been appreciated better in later years. Its resurgent popularity, which may be due to later adaptations of Harris' books and Petersen's success in CSI: Crime Scene Investigation, has seen it labelled as a cult film.


Manhunter was released in a widescreen edition on laserdisc in 1986.[45] It was released on VHS several times, including by BMG on 10 October 1998[46] and by Universal Studios in 2001.[47] It has also been available on DVD in various versions. Anchor Bay released a two-DVD limited edition in 2000. A standard edition, an individual release of the first disc from the two-disc set, was also released at the same time. In 2003 Anchor Bay released the "Restored Director's Cut", which is very close to the "Director's Cut" on the 2000 disc but omits one scene. It does, however, feature a commentary track by Mann.[48]
MGM (current holders of the rights to The Silence of the Lambs and Hannibal) released the theatrical cut of Manhunter on DVD in a pan-and-scan format in 2004.[49] In January 2007, the same version was released by MGM in a widescreen format, for the first time on DVD, as part of The Hannibal Lecter Collection, along with The Silence of the Lambs and Hannibal. Manhunter was also released by itself in September 2007.[49][50] The studio re-released The Hannibal Lecter Collection on Blu-ray in September 2009,[48][51] and Manhunter by itself on Blu-ray two years later.


On its release, Manhunter was met with reviews varying from mixed to negative. At first, it was seen as too stylish, owing largely to Mann's 1980s trademark use of pastel colors, art-deco architecture and glass brick.[12][34][52] A common criticism in the initial reviews was that the film overemphasized the music and stylistic visuals.[4] Petersen's skill as a lead actor was also called into question.[12][34][52] Particularly critical of the film's stylistic approach was the New York Times, which called attention to Mann's "taste for overkill", branding his stylized approach as "hokey" and little more than "gimmicks".[34] Chicago Tribune writer Dave Kehr remarked that Mann "believes in style so much that he has very little belief left over for the characters or situations of his film, which suffers accordingly", adding that the film's focus on style serves to "drain any notion of credibility" from its plot.[12] Sheila Benson of the Los Angeles Times was critical of the film's visuals and soundtrack, comparing it unfavourably with Miami Vice and describing it as a "chic, well-cast wasteland" that "delivers very little".[52][53] The film's stylistic similarity to Miami Vice was also pointed out by Film Threat's Dave Beuscher, who felt it was the chief reason for the film's poor box office results.[54] Writing for the San Francisco Chronicle, Steve Winn derided the film, claiming its lack of a strong lead role caused it to "fall apart like the shattered mirrors that figure in the crimes".[53] Time was more favorable in its review, praising the "intelligent camerabatics" and "bold, controlled color scheme".[55] Leonard Maltin gave the film three stars, calling it "gripping all the way through and surprisingly nonexploitive", although adding that "the holes start to show through" if looked for "too carefully".[56] Manhunter was, however, nominated for the 1987 Edgar Award for Best Motion Picture.[57]
Modern appreciation of the film has seen its standing among critics improve. Salon.com called Mann's original the best of the Lecter series,[58] and Slate magazine described it as "mesmerizing", positing that it directly inspired television series such as Millennium and CSI: Crime Scene Investigation, though calling attention to its "Miami-Vice-like overreliance on synthesized sludge".[59] The Independent called it "the most aestheticised film of the 1980s", and noted its "chilly integrity".[60] British television channel and production company Film4 called it "the most refined screen adaptation of Harris' books", although they found the film's contemporary soundtrack "dated".[61] Sky Movies echoed this sentiment, summing up their review by saying "although it still remains a classic, the film has dated slightly."[62] Retrospective reviews tend to be less critical of the stylized visuals: the BBC's Ali Barclay called the film "a truly suspenseful, stylish thriller", awarding it four out of five stars,[63] and Nathan Ditum described it in Total Film as "complex, disturbing and super-stylish", adding that the 2002 remake could not compete with it.[64] Empire editor Mark Dinning gave the film five stars out of five, praising the "subtlety" of the acting and the "neon angst" of the visuals.[35] Television channel Bravo named Dollarhyde's interrogation of Freddy Lounds as one of its 30 Even Scarier Movie Moments in 2007,[65] and Noonan's portrayal of Dollarhyde was praised by Simon Abrams of UGO Networks as "a highlight of his career".[66]
Despite the low gross on its initial release, Manhunter has grown in popularity in recent years and has been mentioned in several books and lists of cult films.[67][68][69] These reappraisals often cite the success of Silence of the Lambs and its sequels as the reason for the increased interest in Manhunter, while still favoring the earlier film over its successors.[68][69] Telling of this resurgence in appreciation are the film's ratings on review aggregation sites such as Metacritic or Rotten Tomatoes. Compiled mostly from recent reviews for the film, Manhunter has a metascore of 78 on Metacritic, based on ten reviews,[70] and a 94% fresh rating on Rotten Tomatoes, from 33 review