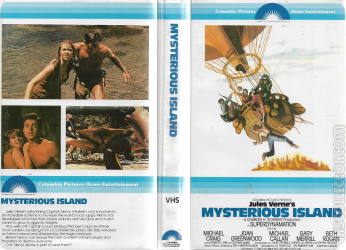 Additional Information
During the Civil War a group of Union soldiers and two Confederates escape the stockade using a hot air balloon and end up on a strange Pacific island.

Mysterious Island (UK: Jules Verne's Mysterious Island) is a 1961 science fiction adventure film about civil war prisoners who escape in a balloon and then find themselves stranded on a remote island populated by giant mutated animals. Based very loosely upon the 1874 novel The Mysterious Island (L'Île mystérieuse) by Jules Verne (which was the sequel to two other novels by Verne, 1867's In Search of the Castaways and 1870's Twenty Thousand Leagues Under the Sea), the film was produced by Charles H. Schneer and directed by Cy Endfield. Shot in Spain and at Shepperton Studios, Shepperton, England, the film serves as a showcase for Ray Harryhausen's stop-motion animation effects. Like several of Harryhausen's classic productions, the musical score was composed by Bernard Herrmann.
In 1865 during the American Civil War, a massive storm sweeps through a Confederate prison camp. Union soldiers Cyrus Harding (Michael Craig), Herbert Brown (Michael Callan) and Neb (Dan Jackson) are planning an escape via a gas balloon tethered next to the compound. When a new prisoner, Union war correspondent Gideon Spillet (Gary Merrill), is brought into their cell, they knock out the guards and escape from the prison house. Once they arrive at the balloon, they drag one of the Confederate guards named Pencroft (Percy Herbert) aboard. After he explains that he knows how to pilot the balloon, they let him join the group.

The balloon carries them westwards across the U.S., and it isn't long before they discover that they are over the Pacific Ocean. A storm arises; the balloon tears open and leaks a significant amount of gas, forcing it into descending and eventually running aground near the shore of an unknown island. The following morning the men reunite and begin to explore the strange island they find themselves upon. They discover that the island has lush tropical jungles, harsh plains, and many volcanoes which frequently erupt.

When they reach the other side of the island, they encounter a monstrous crab. After Neb is nearly killed, the castaways are able to push it into a boiling geyser and have crab meat for dinner. Afterwards, the men continue exploring and find a herd of wild goats which they try to catch. Then they find two unconscious English ladies, Lady Mary Fairchild (Joan Greenwood) and her niece Elena (Beth Rogan), who were shipwrecked here by the same storm. Working together, the castaways find cover and protection in a cave which they call "Granite House", formerly inhabited by a now deceased castaway named Thomas Ayrton. A treasure chest later washes ashore, and in it the men find a variety of useful items, including rifles, nautical charts, and books such as Robinson Crusoe. Markings upon one of the rifles found in the chest indicate that it came from the Nautilus, upon which Spillitt gives Lady Fairchild (who is unfamiliar with the tale) a brief summation of the Nautilus, its creator, Captain Nemo, and its supposed destruction off the coast of Mexico some eight years earlier. Spillet expresses a sense of respect and admiration for Nemo's genius and principles against war, while Harding derides him for being a madman and a murderer, condemning him for the deaths of numerous sailors during his crusade. Making use of the charts, the castaways are able to determine their location and proceed with the construction of a boat on which they can escape the island.

While Mary and Elena are one day tending to the goats, Spillet encounters a giant flightless bird (a prehistoric species called a Phorusrhacos) while fishing. Spillet and the women retreat into the goat pen, but the bird simply jumps over the fence and assails them. As it tries to eat Elena, Herbert arrives and assaults the creature, knifing it until he apparently kills it. Later, as they consume the bird, they discover it was actually killed by a bullet none of them had fired.

A few weeks later, Herbert and Elena are sunning outside when they notice a rivulet of honey. Atop a rocky bluff, they come across an enormous hive inhabited by giant bees, which attack them. As Herbert and Elena escape from the hive into a large flooded cave, they spot the submarine Nautilus inside. They enter the vessel, but knowing that it belongs to someone else, retreat, swimming out of the cave. Meanwhile, Harding, Spillet, Neb, Mary and Pencroft spot an approaching pirate ship. They try to hide, but are discovered, and a fight with the pirates ensues. The castaways prevail only after an explosion mysteriously sinks the pirate ship with all hands aboard.

Once outside, the castaways reunite and meet Captain Nemo (Herbert Lom), who is living aboard his disabled submarine. Nemo has been watching the castaways and secretly assisting them by sending the chest, shooting the giant bird, and sinking the pirate ship. He invites them to dinner aboard the Nautilus, where he tells them that the giant creatures the castaways have encountered are results of his genetic experiments to enlarge the world's food resources, thereby eliminating hunger and economic competition which he sees as prime causes for the wars he was striving to end all his life. Due to their fortitude, he has selected them to assist him in his efforts to make his achievements known to the world, especially since the Nautilus is incapacitated beyond repair and the volcano the island consists of will soon erupt, exploding the island and sinking it into the deep.

When time runs out, the castaways discover that Nemo has invented an air-filled raising system which can refloat the pirate ship, the only readily seaworthy vessel on this island. Nemo teaches them to breathe underwater using his special "shell" air tanks, and they begin trying to raise the ship, despite the initial interference by a giant cephalopod. With the pirate ship raised and seaworthy, the castaways climb aboard. The volcano erupts and Nemo is killed as the Nautilus is buried, but the rest escape and begin the journey home, vowing to continue Nemo's dream of achieving lasting peace throughout the world.