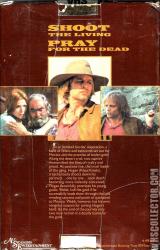 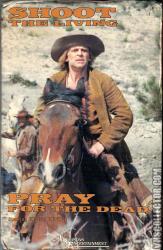 Shoot the Living and Pray For the Dead

Catalog Number
4-49002
-
Primary Distributor (If not listed, select "OTHER")
All Seasons Entertainment

Additional Information
Shoot the Living and Pray for the Dead (Italian: Prega il Morto e Ammazza il Vivo) is the original release title of the 1971 Italian dramatic spaghetti western film directed by Giuseppe Vari, and starring Klaus Kinski and Dante Maggio.[1][2][3] With its many international releases, the film had additional English titles of Pray to Kill and Return Alive, To Kill a Jackal, and Renegade Gun.[4] The script by Adriano Bolzoni is inspired by American noir-crime films of the 1930s and 1940s, and Kinski's entry into the scene reprises Edward G. Robinson's presence in Key Largo (1948)


After having robbed a bank for $100,000 in gold bars, Dan Hogan (Klaus Kinski) and his gang meet up at the Jackal's Ranch stagecoach way station near the Mexican border, where Hogan's girlfriend Eleanor (Victoria Zinny) is to surreptitiously bring their stolen gold to them. While they await her arrival, they encounter John Webb (Paolo Casella), a stranger who had shot the man who was to be their guide and who himself wants half their gold in exchange for leading them into Mexico. Hogan agrees and they depart into the desert with the law close behind. In fact, Webb plots to destroy the gang as Hogan, during his earlier days with the Ku Klux Klan, had killed Webb's father.

Of its German release, Das Filmmagazin said that there was nothing wrong in principle for Klaus Kinski to be in this spaghetti western even though the actor and genre have been in better productions. The role of Dan Hogan was a perfect opportunity for Kinski to create a character who was an ice cold lunatic on the verge. Das Filmmagazin also felt that the reduced scope of the limited locations of the coach station and the desert allowed the director to use hand-held shots to create a surreal tonality. The wobbling close-ups of faces captured intensity of expressions, short shots with wide focal lengths, tilted camera angles, and other unusual camera work were used to generate mood. They summarised by writing "Ein spannender, nahezu minimalistischer Italowestern, der zwar nicht mit den Besten seines Fachs mithalten kann, aber in der zweiten Liga eine ziemlich gute Figur macht." (An exciting, almost minimalist spaghetti western, which, although it cannot compete with the best in its field, makes a pretty good figure in the second division).[3] The Spaghetti Western Database calls the film a "thoroughly interesting mystery thriller disguised as a Western" and representative of "one of the best examples of the forgotten gems of the Spaghetti Western".[4] On the other hand, Italian film critic Paolo Mereghetti criticized the film, calling it "an absolutely conventional western, with a Kinski to the minimum of his actorial capabilities".[6] In his review for the website Sense of View, Carsten Henkelmann, while highlighting the lack of rhythm ("The action is for the most part very quiet, the narration is quite slow"), praised the originality of the plot ("it is a Western that uses the usual gunfights as a last resort").[7]

In his investigation of narrative stuctures in Spaghetti Western films, Fridlund counts Shoot the Living and Pray for the Dead among the many stories about an infiltrator with a hidden agenda that took their inspiration from A Fistful of Dollars.[8]


The Texas Rangers would love to slap a pair of cuffs on Dan Hogan (Klaus Kinski), the leader of an unsavory group of outlaws. While hiding out after a heist, Hogan senses his men are antsy; he knows they wouldn't hesitate to kill if it meant one less person to share the bounty with. Then a stranger (Paul Sullivan) turns up offering to take the men to safe haven in Mexico ... but all is not what it seems in director Giuseppe Vari's 1971 Western.