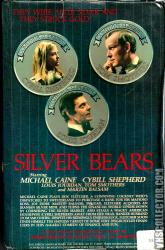 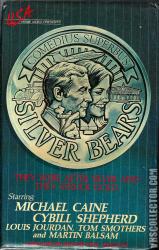 Additional Information
They were after silver and they struck gold.
Director Ivan Passer and screenwriter Peter Stone adapted Paul Erdman's novel concerning a group of con men who arrive in Switzerland and end up conning each other. Michael Caine stars as Doc Fletcher, a lackey for gangster Joe Fiore (Martin Balsam), who is sent to Switzerland to purchase a bank for his boss. Prince di Siracusa (Louis Jourdan) is aiding Doc in his purchase but is working on his own scam. They both meet Shireen Firdausi (Stephane Audran) and Agha Firdausi (David Warner), who are working on their own deal concerning an Iranian silver mine. Also arriving in town is Donald Luckman (Tom Smothers) and his wife Debbie (Cybil Shepherd), sent by banker Henry Foreman (Joss Ackland) to buy a bank as a front for Charles Cook (Charles D. Gray), a billionaire who is looking for a way to disguise his profits. With all these schemers in tow, various confidence games play out and characters switch alliances and obligations, while some wind up in jail.

Financial wizard "Doc" Fletcher (Michael Caine) persuades his boss, American mobster Joe Fiore (Martin Balsam), to buy up a Swiss bank in order to more easily launder their ill-gotten gains. The impoverished Italian Prince Gianfranco di Siracusa (Louis Jourdan) agrees to act as chairman of the board in order to give it an air of respectability. "Doc" goes to Lugano, a major center of banking activity, along with the Don's wayward son Albert (Jay Leno), only to find that the best bank that the Prince could get consists of some shabby offices above a pizza restaurant with assets of $900.

To make up for this, the Prince suggests that they invest in a silver mine recently discovered in Iran by his distant cousins, Agha Firdausi (David Warner) and his sister Shireen (Stéphane Audran). The mine contains hundreds of millions of dollars' worth of untapped silver. The Firdausis wish to keep it a secret due to the heavy taxes and the threat of the mine being nationalised by the government. Through a little wheeler-dealing, "Doc" manages to obtain $5 million in Iranian rials from Agha — as security for a loan of $20 million — and uses the money to obtain better banking premises and put on a major show that attracts powerful investors.

Before long the Firdausi silver is flooding the market which leads to a drop in its value at the London Metal Exchange. Charlie Cook (Charles Gray), a leading figure in the silver business and one of the richest men in the world, decides that the best way to stop the downward plunge is to take over the bank responsible and thus close down the mine. He contacts Henry Foreman (Joss Ackland), president of the First National Bank of California, who is keen on branching into Europe. Foreman sends one of his accountants, Donald Luckman (Tom Smothers), to Lugano where he meets "Doc" and his associates. His questions and evasive attitude makes them suspicious and to find out more "Doc" approaches and seduces Donald's fun-loving but bored and neglected wife Debbie (Cybill Shepherd).

In the course of their affair, Debbie casually reveals in conversation all about Cook's interest in the mine and the bank. Donald, unaware of what is going on, returns and offers up to $60 million for the bank (which is really worth only about a sixth of the amount). "Doc" will have none of it since it means losing everything he has ever worked for, but Albert and Joe Fiore, who actually owns the bank, jump at the opportunity. "Doc" goes to Las Vegas and, through a subtle threat, manages to get Joe to give him time to made a bid of his own.

"Doc" and the Prince join the Firdausis at their warehouse in Dubai which is full to the brim with silver bars from the mine. When they tell him that they cannot lend him $60 million to buy the bank, "Doc" threatens to call in the earlier loan of $20 million and seize the mine. It's at this point that Agha and Shireen drop a bombshell on their two friends: there is no silver mine!

The Firdausis are in fact smugglers who have obtained all their silver from India. The silver mine was just a cover, a means of obtaining the money needed for their operation. "Doc" faces a terrible dilemma: if he tells Charlie Cook that the mine does not exist the deal will collapse and "Doc" will be killed (literally) by Joe Fiore; but if he does not tell Cook, the deal will go through and "Doc" will lose the bank.

The deal does go through with Foreman and Donald Luckman sealing it with "Doc" and Albert Fiore. In his report on the purchase of the bank Donald has left out all mention of the silver mine, as per the instructions of Foreman and Cook, who was keen to keep it secret, and put the bank's main assets down as "oil storage tanks". Foreman then goes to Cook and demands an exorbitant amount for the silver mine only to be told that it does not exist and that he will thus not be refunded the $60 million used to buy the bank.

Foreman can recoup $50 million in insurance since the purchase report mentions non-existent "oil storage tanks", thus making a case for fraud. "Doc" offers to give Foreman an additional $10 million which he will get from Cook who, in return, will obtain exclusive purchasing rights to the Firdausi silver. In exchange, Foreman gives "Doc" the bank — which was really only worth $10 million in the first place. Donald then reveals that for the insurance claim to be valid there will have to be a criminal prosecution and a scapegoat will be needed in order to go to prison. The others agree, deciding that it should be the one who falsified the report — meaning Donald himself!

Some time later, back in Lugano, the Prince marries Shireen Firdausi, even though he was one of those whom she conned into believing in the existence of the mine. Agha does not attend the wedding and ShirRe
Related Links
Scopophilia
Review
VHS Review
Analysis of Film
Village Voice pg 51
Video Clip: Trailer