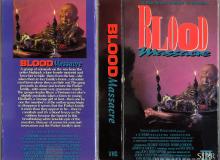 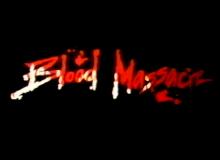 NONE - 3 Star Releasing (III Star) | 1987 | VHS | Slipcase
Summary
“The Parker family is more than they appear to be… they’re cannibals and it’s a blood frenzy as robbers become the hunted in this breathtaking white knuckle epic of the macabre. Beware of rooms for rent and never, never eat the Parker family’s stew."
Body

Back when I started collecting these things, I sought out every "massacre" title I could get my hands on, many of which I wound up reviewing. I'm not sure how I discovered this one, but how could you pass up a title that includes both the words "blood" and "massacre"? Although it certainly has a slasher vibe, the film is far more bizarre than your generic 80s slasher. In fact, its more of a cannibal film, which I would describe as The Texas Chainsaw Massacre meets Last House on the Left, but with alittle bit of a Zombie twist at the end. As for the cover art, it's pretty fun on this one. A severed head, rib cage, and limb all on a silver platter, waiting to be eaten by some mad redneck. The synopsis on the back of the sleeve is actually pretty accurate to the movie, however, I wish they hadn't revealed that the family were cannibals. This would've been a fun turn of events. 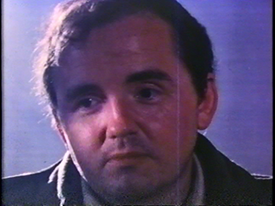 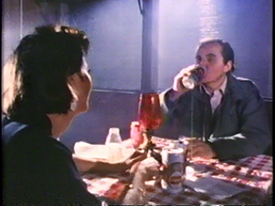 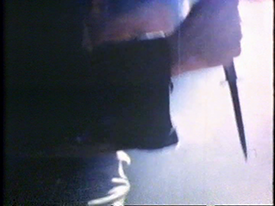 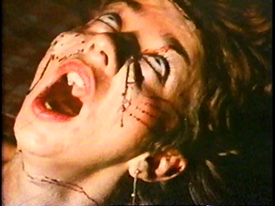 The film begins with Rizzo, a Vietnam vet, whose having a drink at a bar. He's portrayed by George Stover, a Dohler regular. He tries his damndest to act tough as Rizzo, but its hard for me to take this guy seriously. He just reminds me of George Costanza too much - just a short balding guy pissed off at everyone. Anyway, something happens at this bar that causes him to flip his lid and stab a woman in the face repeatedly. He's clearly just stabbing the table but I'm assuming Dohler wants us to believe that he's stabbing this woman's face to shreds. Rizzo then hooks up with some friends, they rob a video store and then carjack a motorist when their car breaks down. She takes them back to her family's place where the crooks hold them captive... briefly. There's a bizarre make out session between Stover and a family member that involves cutting, bleeding and blood licking (all consensual - it'd be less weird if it wasn't). 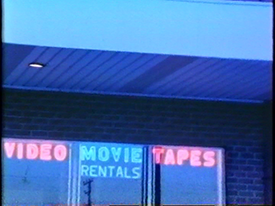 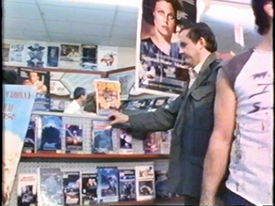 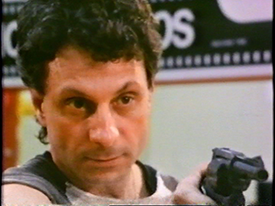 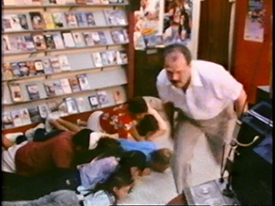 Later we discover that the entire family are cannibals. One by one, Rizzo's buddies are knocked off, until he's left to wander around in the woods. Instead of running away like any reasonable person, he channels his inner Kevin McAllister and spends probably the entire night setting up traps and testing bombs. Somehow this fools doesn't get caught while he's doing all this. Ironically, he gets caught in one of their traps and the father and daughter find him. While hanging upside down from a tree, they torment Rizzo by slicing him up and revealing their true identity by peeling off their skin. As it turns out, they're some sort of zombie creatures. There's never any real explanation of what they are. Possibly just a weird twist to gross out the audience. 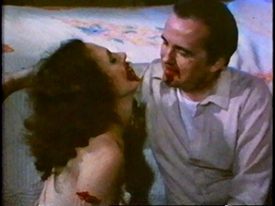 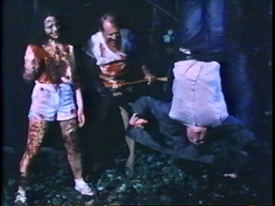 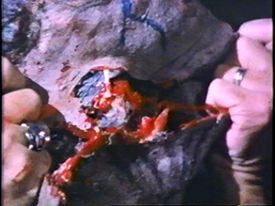 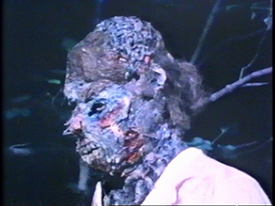 I definitely have to recommend this movie. Its just so weird, bizarre and bloody - a totally underrated flick. It's appeared on several of those budget multi-feature DVD sets and you can even find an official upload of the movie on YouTube. Although this version appears to have better image quality from the scratched up travesty of the VHS print, it doesn't have the original title sequence. For whatever reason, someone thought it'd be a brilliant idea to remove the original titles and add generic digital ones. The upgrade was unnecessary and hurts the movie. The animated title card with the blood splatter of the original VHS print was perfect. LEAVE IT.