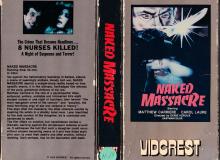 NONE - Vidcrest | 1984 | VHS | Slipcase
Summary
“Set against the hallucinatory backdrop of Belfast, Ireland, a scene of seemingly endless, bloody civil war, NAKED MASSACRE depicts a scalpel-sharp reality based on true, specific events. It is the ultimate, hard-edged film witness of the pure, gratuitous violence of our era.”
Body

Yet, another title that conjures up images of sex and violence. I discovered this one during another one of my "massacre" hunts. Of the ones I've found, Naked Massacre probably has one of the more provocative titles. I do wish, however, that the title was something more relevant, such as "Nurse Massacre," as Naked Massacre sounds like something a kid came up with on the spot. In actuality, the original title is probably the most fitting - Born For Hell, a reference to a tattoo on the killer and a descriptor of his life. But because us Americans love the good ol' sex and violence, it was re-titled Naked Massacre over here in the States. The film was released twice on videocassette in the U.S., the first from Vidcrest (the one I originally reviewed) and the other from Questar, a mysterious distributor I haven't seen any other releases from. The Questar artwork is fantastic, with a bloody knife cutting into a nurse's cap, and above it, the title scrawled in blood. The Vidcrest cover falls a little flat in comparison, but does have that early home video charm that I always love. 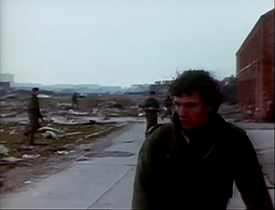 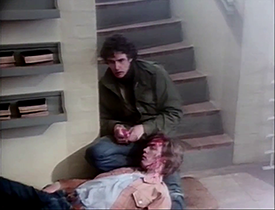 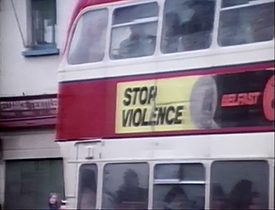 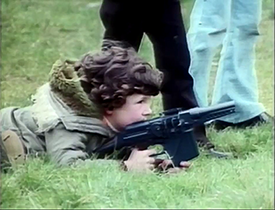 The film is set during the Vietnam war, where an American soldier named Cain is discharged for attempting suicide. In trying to get home, he finds himself in Belfast, Ireland, where a vicious civil war is taking place. From the start, the director makes it obvious that the film is a statement on violence. There's gunfire in the streets, children playing with toy guns in the park, billboards on buses reading "STOP VIOLENCE" and so forth. When a bomb explodes inside a church, we're first hinted to Cain's mysogyny. When he finds a woman dying in an aisle, he leaves her to rescue a man instead (who ends up dying anyway). Down on his luck, he basically has nothing, except for a knapsack, a knife and some change to play a pervy pinball machine at a nearby bar. He spends the night at a flophouse, where he makes a Vietnamese friend who offers to pimp him out to make some dough. From the conversation between the two, we also learn how Cain once had sex with his sister (a prostitute) before she ultimately ended her own life. Yet, another indicator that Cain is disturbed. 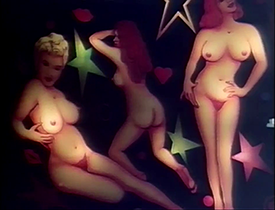 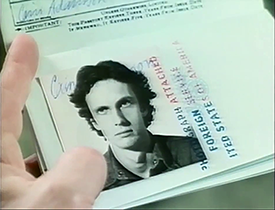 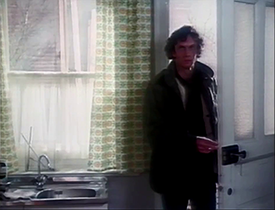 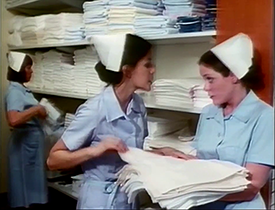 Bored and without money, he wanders around the city aimlessly. At one point, he helps two men rob an old hooker, for which she strangely thanks him and offers a freebie. Back at the bar playing his favorite pinball machine, he notices through a nearby window, a van unloading nurses at a building across the street. He makes a preliminary visit to beg for food, and realizes one of the nurses resembles his wife back home. Later that night, he makes another visit to the nurses and this time, all Hell breaks loose. While tying up the girls, he explains that he only intends to rob them for travel money to get home. The night takes a devastating turn when he attempts to rape the woman who reminds him of his wife. His hatred for his wife is made clear, when he tells her how one of his Army buddies knocked her up back home. During a forced kiss, she bites into his lip and he responds by strangling her to death. He then takes two more girls into a nearby room and has them disrobe. At knifepoint, one is forced to go down on the other. He then places the knife into the hands of the girl on top, forcing her to plunge it into her best friend's chest. Throughout the rest of the night, several more girls are dispatched, until only the pregnant girl remains (as far as he knows). Delirious and in shock, she cracks up laughing. This amuses Cain, and he brings her into the kitchen for some cake. Thinking all is under control, he allows her to handle his knife, when suddenly, she plunges it into her chest. Cain spends the rest of the night at the house, not realizing there's one last girl hiding under the bed. The following day at the flophouse, he attempts suicide by slicing into one of his wrists. He later awakens on a hospital bed to a doctor cleaning his wound. He notices the tattoo, and realizes Cain is the nurse killer. He then says to the doctor, "$5000 is a lot to a man who wants to die" (still not sure what is meant by this). Instead of credits, the film ends with black and white portraits of the women slain by Cain. 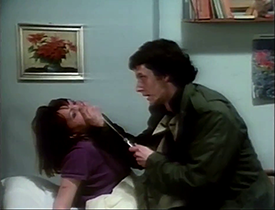 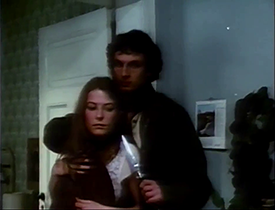 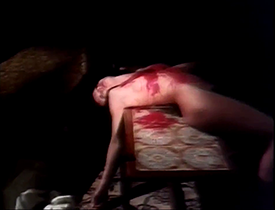 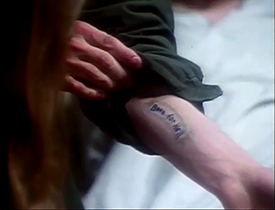 As most folks know, the movie is a loose retelling of the Richard Speck spree killing of 1966. In fact, I wish that they had just made it a Richard Speck movie, since it shares a few key details, such as a survivor hiding under a bed and noticing a tattoo that read "Born for Hell" (although the actual Speck tattoo read, "Born to raise Hell"). The film is well constructed and includes some major French actors, so I'm surprised it hasn't gotten the credit it deserves. Perhaps its reputation has been tarnished by the sleazy American title? Nonetheless, I totally recommend Naked Massacre. It's an incredibly dark and mean-spirited film, with a vibe much like Combat Shock (but with some class). A film worthy of a proper restoration. If not for its social commentary or technical merits, then for its sheer brutality on compassion. Because it had fallen into the public domain, you can find it virtually anywhere. Budget discs, multi-packs, streaming, etc. The tragedy of this (although I still very much support the public domain) is that it discourages distributors from investing in its restoration. However, I'm certain there's enough of us out there who'd back a proper release of this film. Below is my original YouTube review from years ago.