CHE 4002 - Celebrity Video (Home Ent.) | 1988 | VHS | Slipcase
Summary
“Who’s responsible for the horrific murders of beautiful coeds? One girl is cut-up and pushed out a window. Another is sadistically tortured. And yet a third is suffocated by a concrete facial. When will this madness end… and what sadistic killer is behind it?”
Body

I must admit, I’m completely torn. Here’s the thing – I originally reviewed this back in 2012 and pretty much brushed it off as another generic slasher flick. But upon rewatching recently to republish the review on the new site, I realized its actually far better than I gave it credit for. Perhaps that’s because I’ve been watching such trash lately due to all the write-ups I’ve been doing for my oldest video reviews? I don’t know. Of course, the film has every slasher cliché, but for a fairly forgotten slasher flick, I’m surprised at how fun it was. LOTS of nudity (almost every woman who’s murdered is topless), great giallo imagery, the killer’s silhouette, women tied up and screaming, very 80s (complete with aerobics scene), a few memorable murders (the record slash)… However, I still stand by my comments on what I didn’t like in the film, such as Mark the stoner friend (and the stupid sound effects that accompany him) and the heavy handed red-herrings.

I’m quite surprised this hasn’t been picked up yet for blu-ray. I have no doubt that at least several of the boutique labels out there are eyeballing it. Perhaps its film elements are missing? I’d love to see the film restored and given new life. Maybe it is just a mediocre slasher film, but it’s a GOOD mediocre slasher film.

Fatal Pulse is your standard low budget slasher. The year is 1988, mid-way through the second slasher cycle of the late 80’s. At this point, directors and writers were throwing in some more controversial issues of the time, such as aids and homosexuality. They even ramped up the number of female killers, I guess in a desperate attempt to have a twist ending (although it wasn’t new to the genre). The cover art for this flick is underwhelming. There aren’t any knives, blood, or killers in the shadows. All we get is a scared face with some creepy eyes over a hand. It suggests something more supernatural than slasher, and for the longest time, I wasn’t even aware this was a slasher film. The plot pretty ordinary. It doesn’t have the homosexual subplot and no, the killer is not a woman. But what it does do is attempt a more “moral” or “scientific” twist. I only use the word “twist” because from watching the film, you could certainly tell the ending was truly intended to an “oooohhh! Really??” type ending. 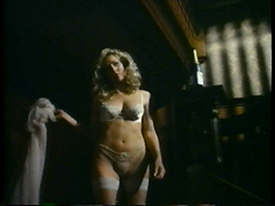 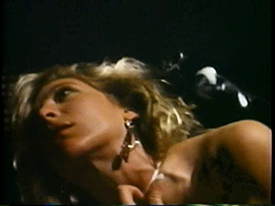 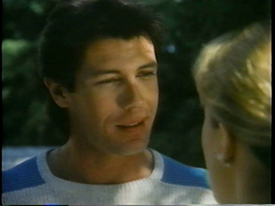 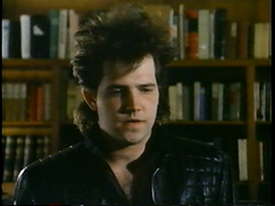 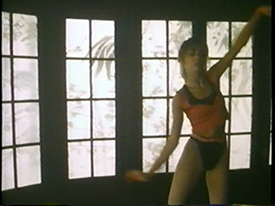 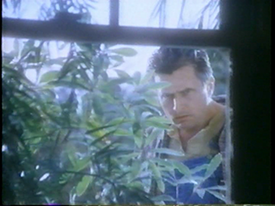 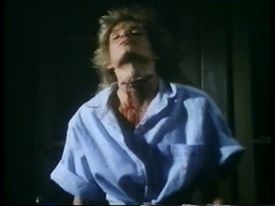 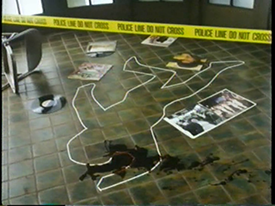 Jeff, our main guy, is implicated in the crime by his ex-best friend, Brad, who just wants his girl. The rest of the movie is pretty much a few girls getting knocked off and Jeff upset with everyone blaming him. Since the killer’s face remains hidden, the story becomes a whodunit with Brad as the first red-herring. Because of his jealousy towards Jeff, we are lead to believe he may be killing the girls to frame Jeff. But then a second red-herring emerges. He’s the caretaker/owner of the sorority house (who didn’t see that coming?). This guy is disheveled, suffers PTSD from being in combat (how cliché) and has a fervent hatred for the girls in HIS house. Because of all this we KNOW he is NOT the killer. It would just be too obvious and I’m insulted the filmmakers would even believe we’d fall for it. 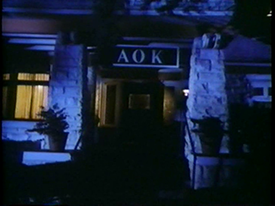 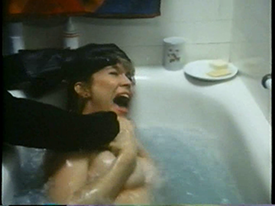 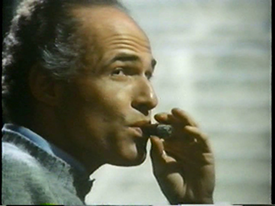 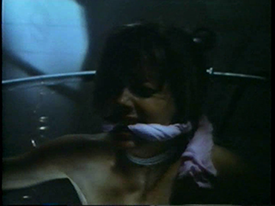 The killings in the film are mediocre and what you would expect from a low budget slasher of this time. The most memorable scene in the movie is when a woman has her throat sliced with a record. Is a record sharp enough to tear through human skin? Probably not, but its cheesy fun nonetheless. One woman is thrown from a window (another porn star); another is killed in the bathtub. There’s this one shocking death (pun intended, but still not as cool as the record death) where a girl is tied to a chair and tortured with electrocution. This sounds more interesting than it actually is. Again, sadism is intended to make us suspect the insane war vet. 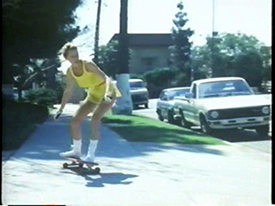 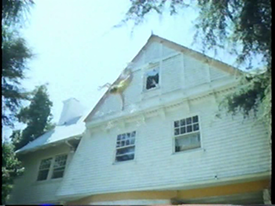 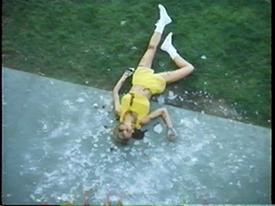 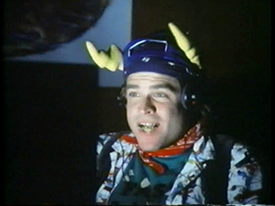 Eventually a lynch mob gathers to chase down Jeff and he has no one to go to except his dumb stoner friend. You’d think he’d go to someone who wasn’t so buzzed and actually wanted to help him. But after applying some pressure, his friend agrees to help. Unfortunately, every time this character enters a scene, we ehar a loud “BOING!” cartoon sound effect. I know there were a few teen comedies in the early eighties that did this sort of thing, but this is not a comedy, nor is there the suggestion that it was intended to be. The sound effect is just distracting, stupid and out of place. At one point when Jeff is being attacked by the lynch mob, his stoned out friend comes to his rescue dressed as a super hero! An embarrassing moment for the filmmakers for sure. 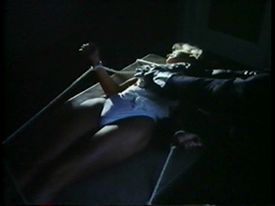 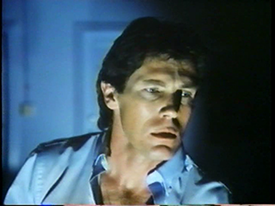 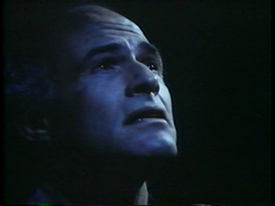 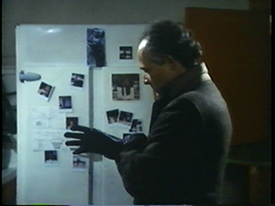 As Jeff runs from the lynch mob, he hides out in his professor’s office and after reading his journal, realizes he is the killer. Apparently the professor has cancer and has been experimenting on himself with different chemical concoctions which drive him into temporary insanity (Jekyll and Hyde cliché). Not only does this scenario attempt to have us sympathize with the killer, but it also establishes a “science gone bad” theme. The professor then attempts to kill Jeff and his girlfriend, when suddenly, who comes to the rescue to? No, not his dumb stoner pal in a cape, but rather the caretaker. Like many films before it, the “crazy” guy is redeemed and we feel like a-holes for passing judgment on him (if you fell for the red-herring of course, which you probably didn’t). The end. 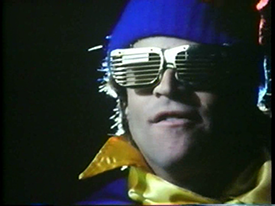 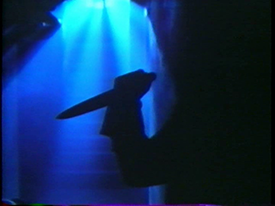 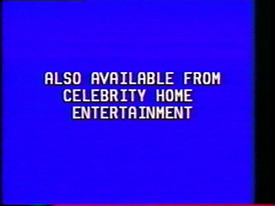 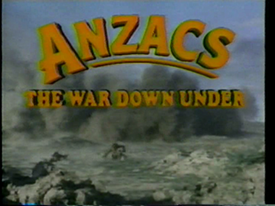 The editing was decent, the acting was decent, the plot was decent, the gore was decent, etc. This movie is just mediocre and not worth remembering. At least if it were awful there’d be something to talk about, but there just isn’t anything memorable about this one except for maybe that one record death. It feels a lot like a “Sorority House” knock off type film. If you’re a slasher connoisseur, I suggest checking it out if only to expand your viewing horizon but if you’re looking for something different and edgy, look elsewhere.

Check out the poor quality trailer below. Despite the video's title, this film did not have a theatrical release.