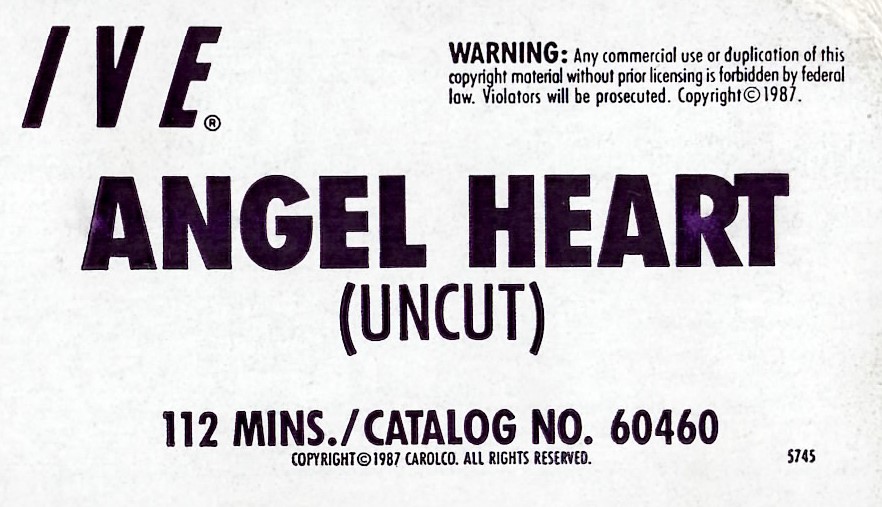 It will scare you to your very soul.

Harry Angel is searching for the truth... Pray he doesn't find it.

Harry Angel has been hired to search for the truth... Pray he doesn't find it.

Nothing can prepare you for the ending of Angel Heart.

The time is the 1950s: seedy Brooklyn private eye Harry Angel (Mickey Rourke) is hired by shady Louis Cyphre (Robert De Niro) to locate a pop singer who reneged on a debt. Harry ventures into Harlem, the first step of a Heart of Darkness-inspired odyssey. Each time Harry makes contact with someone who might know the singer's whereabouts, he or she is killed in a horrible, ritualistic fashion; a Satanic cult seems to be at the bottom of all the carnage. Harry solves the mystery, all right. He just didn't know that he had the answer all along -- even before Louis entered his office. Also available in the "unrated" video version, Angel Heart is best known as the film that nearly got an X-rating due to a no-holds-barred sex scene involving Mickey Rourke and Lisa Bonet.

Angel Heart is a 1987 American psychological horror film written and directed by Alan Parker, and starring Mickey Rourke, Robert De Niro, and Lisa Bonet. The film is adapted from the novel Falling Angel by William Hjortsberg, and is generally faithful to the novel with the exceptions being the introduction of a child of Epiphany Proudfoot conceived at a voodoo ceremony by "a devil", and that the novel never leaves New York City, whereas much of the action of the film occurs in New Orleans.

Angel Heart gained attention and controversy even before its release. Bonet was previously known for her role on the family-oriented sitcom The Cosby Show, and several seconds of her extended, graphic and blood-drenched sex scene with Rourke had to be trimmed in order to secure the film an 'R' rating on initial release, though later an uncut X rated version was released.[1]
Rotten Tomatoes counted 23 reviews with 78% of them being "fresh" or favorable; Average Rating: 7.3/10.[2] Angel Heart broke even at the box office with its budget of $17 million.[3]
Roger Ebert gave the film three and a half stars. He said: "Angel Heart is a thriller and a horror movie, but most of all it's an exuberant exercise in style, in which Parker and his actors have fun taking it to the limit".[4]
The film acted as the inspiration for the first entry in the Gabriel Knight computer game series, Gabriel Knight: Sins of the Fathers.