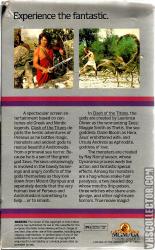 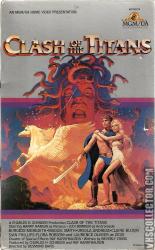 Clash Of The Titans

An Experience The Fantastic

You will feel the power. Live the adventure. Experience the fantastic.


The eschewing of modern optical effects techniques in favor of the classic stop-motion animation work of special effects legend Ray Harryhausen was a delightful highlight of this action adventure that attempted to give Greek mythology the Star Wars (1977) treatment. Harry Hamlin stars as Perseus, a mortal who, due to the interference of the mighty god Zeus (Laurence Olivier), finds himself in the city of Joppa, far away from his island home. There, he falls in love with Andromeda (Judi Bowker), an imprisoned princess. To free her, win her hand, and thus half of the kingdom, Perseus solves a riddle, but Joppa's enraged ruler orders Andromeda fed to the Kraken, a towering sea monster that's the last of the powerful Titans. In his quest to save Andromeda, Perseus must endure a series of trials with the help of the winged horse Pegasus and a friendly playwright, Ammon (Burgess Meredith). His ultimate goal is to secure the head of the grotesque Gorgon named Medusa and use it to turn the Kraken into stone, but dangers await, including the hideously deformed Calibos (Neil McCarthy)


Clash of the Titans is an 1981 British-American fantasy adventure film involving the Greek hero Perseus, and features the final work of stop motion visual effects artist, Ray Harryhausen. It was released on 12 June 1981 and grossed $41 million at the North American box office,[1] which made it the 11th highest grossing film of the year.[2] A novelization of the film by Alan Dean Foster was published in 1981.
Warner Bros. released a remake in 3D on 2 April 2010


In 1978, Andor Films submitted a copy of the script to the British Board of Film Classification, seeking advice on how to secure either a "U" or an "A" certificate. The draft script included scenes which the BBFC considered would not be acceptable under those certificates, including the Kraken tearing Pegasus to pieces and Andromeda being naked during the climax of the film. Changes to the script and, on submission, some cuts to Perseus' final battle with Calibos were made and the film secured the "A" certificate: "Those aged 5 and older admitted, but not recommended for children under 14 years of age".[6]
Ray Harryhausen used the special effects technique of stop motion animation to create the various creatures in Clash of the Titans. Harryhausen was also co-producer of the film, and retired from filmmaking shortly after the movie was released, making this his last main feature film. Despite the mechanical owl Bubo's similarities to the droid R2-D2 of the 1977 film Star Wars, Harryhausen claimed that Bubo was created before Star Wars was released.[7][8] The BBFC, reviewing the film for certification in 1981, said that Harryhausen's effects were well done and would give entertainment to audiences of all ages, but might appear a little "old hat" to those familiar with Star Wars and Superman.[6]
Stars Harry Hamlin and Ursula Andress were romantically involved at the time of production. Their son, Dimitri, was born in 1980 after filming was completed, and their relationship ended in 1982.
The film's screenwriter, Beverley Cross, was married to Maggie Smith, who played Thetis, until his death in 1998. Cross worked with producer Charles H. Schneer, before, writing the screenplay for Schneer's production of Jason and the Argonauts.
A sequel, Force of the Trojans, detailing Aeneas' mythological journey after the fall of Troy, was proposed to MGM in 1984, but never produced.