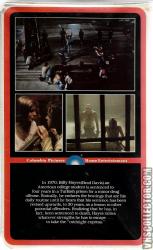 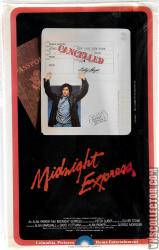 Additional Information
On October 6, 1970, while on holiday in Istanbul, Turkey, American college student Billy Hayes straps 2kg of hashish blocks to his chest. While attempting to board a plane back to the US with his girlfriend, Billy is arrested by Turkish police on high alert due to fear of terrorist attacks. He is strip-searched, photographed and questioned. After a while, a shadowy American (who is never named, but is nicknamed "Tex" by Billy due to his thick Texan accent) arrives, takes Billy to a police station and translates for Billy for one of the detectives. On questioning Billy tells them that he bought the hash from a taxicab driver, and offers to help the police track him down in exchange for his release. Billy goes with the police to a nearby market and points out the cab driver, but when the police go to arrest the cabbie Billy sees an opportunity and makes a run for it. He gets cornered in a building and is recaptured by the mysterious American.
During his first night in holding, Billy, freezing cold, sneaks out of his cell and steals a blanket. Later that night he is rousted from his cell and brutally beaten by the chief of guards, Hamidou.
He wakes a few days later in Sağmalcılar prison, surrounded by fellow western prisoners Jimmy (an American - in for stealing two candlesticks from a mosque), Max (an English heroin addict) and Erich (a Swede) who help him to his feet. Jimmy tells Billy that the prison is a dangerous place for foreigners like themselves and that no one can be trusted, not even the young children.
In 1974, Billy's sentence is overturned by the Turkish High Court in Ankara after a prosecution appeal (the prosecutor originally wished to have him found guilty of smuggling and not possession), and he is ordered to serve at least a 30-year life term for his crime. His stay becomes a living hell: terrifying scenes of physical and mental torture follow one another culminating in Billy having a breakdown and beating to near death his fellow prisoner Rifki, biting out Rifki's tongue in the process. Following this breakdown he is sent to the prison's ward for the insane where he wanders in a daze among the other disturbed and catatonic prisoners. He meets fellow prisoner Ahmet whilst participating in the regular inmate activity of walking in a circle around a pillar. Ahmet claims to be a philosopher from Oxford University and engages him in conversation to which Billy is unresponsive.
In 1975, Billy's girlfriend, Susan, comes to see him and is devastated at what has happened to him. She tells him that he has to escape or else he will die in there and leaves him a scrapbook with money hidden inside as "a picture of your good friend Mr. Franklin from the bank," hoping Billy can use it to help him escape. Her visit moves Billy strongly, and he begins to regain some of his senses. He says goodbye to Max, telling him not to die and to wait for Billy to come back for him. He attempts to bribe the head guard to take him to the sanitarium where there are no guards. Instead the guard takes Billy past the sanitarium to another room and attempts to rape him. With a freak stroke of luck, Billy kills the brutish and sadistic guard by pushing him on to a coat hook. He seizes the opportunity to escape by putting on a guard's uniform and managing to walk out of the front door. In the epilogue it is explained that on the night of October 4, 1975 he successfully crossed the border to Greece, and arrived home three weeks later.
Related Links
The History of the Academy Awards 1978
FilmsGraded
Script
Article on Stones Apology for Film
10 Best Prison Films
Review
Milwaukee Pg 25
Movie Mistakes
Film Judge
Supporting Oscar 1978
Video Clip: Alan Parker Interview
Video Clip: Siskel & Ebert Oscars 1978