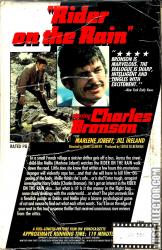 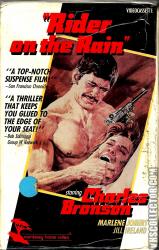 Rider on the Rain

Adapted from a novel by acclaimed mystery writer Sébastien Japrisot, this French/Italian nailbiter stars Marlène Jobert as Mélancolie "Mellie" Mau, a young woman stalked by on a rainy afternoon by a mysterious stranger. The man eventually breaks in on Mellie while her husband is gone and rapes her. She grabs a shotgun and kills her assailant, dumping the body into the ocean. When the body is recovered, American military officer Dobbs (Charles Bronson) accuses Mellie of the murder -- and of stealing the U.S. Army money that the rapist had been carrying with him -- and that's only the beginning. The plot piles one twist upon another, deliriously confounding the audience at every turn.

In a god-forsaken, off-season French seaside town we meet Marlène Jobert starring as the diffident, nail-biting, beautiful and lonely Mélancolie "Mellie" Mau, who watches a mysterious stranger step down from the bus into the pouring rain. He follows and eventually rapes her, while her husband (an airline navigator) is away from home. However, when she comes to her senses again, she manages to kill her attacker and dispose of the corpse. She decides to keep quiet about the whole incident to avoid complications with her jealous husband. But just then Charles Bronson as the tough US Army colonel Harry Dobbs appears on the scene. Dobbs is out on undercover work trying to track down a serial rapist who has escaped from a military stockade in Germany. He confronts her, and she is shocked that he seems to know exactly what has happened, but she sticks to her story of knowing nothing. Since the Colonel is less than forthcoming about his own mission, she also starts to worry about her absent husband possibly being implicated in something shady. Then a dead body is discovered on the beach where she dumped the rapist's body – and further complications ensue.