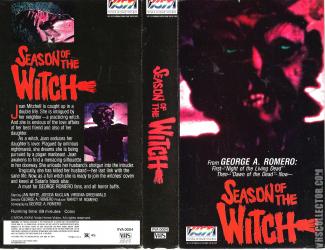 Season of the Witch

Additional Information
Every Night is Halloween.

In this little-seen early film from George Romero, Jan White plays an affluent housewife able to keep her creeping disaffection at bay through therapy, friends, and a devotion to her family. When her friends catch wind that a local woman Virginia Greenwald practices witchcraft, their curiosity is piqued and they pay her a visit. For White, however, the visit has profound implications. Exploring the practice herself she finds an escape from her stifling existence -- but at a cost.


Season of the Witch, also known as Hungry Wives, and Jack's Wife, is George A. Romero's third film and second horror film.[1] Filmed in 1971 and released in 1972, the film is about a housewife who becomes involved in witchcraft. The film was shot in Pittsburgh and the suburb of Forest Hills, Pennsylvania while most of it was shot in the home of the parents of Christine Forrest, a crew person and actress whom Romero later married.
Romero has said that shooting the film was very trying, as they ran out of money during the production. He also did not like the performances. The director has expressed that this is the only one of his films that he would like to remake.


The film was originally released in the U.S. as Hungry Wives and in the U.K. as Jack's Wife. It was also issued under the title Season of the Witch because the 1966 song of the same name by Donovan appears in the film's soundtrack.
Season of the Witch was the original title of the Martin Scorsese film Mean Streets (1973), in which the main character, referring to their bar hangout, says, "And I wouldn't call it Tony's Place or Charlie's Place…I'd call it something like Season of the Witch… get it?"
In October of 1982, it was re-released as "Season of the Witch" in the United States on the same weekend as "Halloween III: Season of the Witch," apparently in an attempt to cash in on the potential success of the popular slasher series.


Pop quiz: 21st Century Distributors mined the vaults of genre films of the 70s and re-released them with different titles theatrically in the 80s. Name these 21st Century released films by their poster taglines and their original titles:


A) If your skin doesn't crawl, its on too tight!

B) He's the gypsy king of the carnival men! To be famous he lies, cheats, steals, even sometimes kills!


D) If you think you are being followed home from this movie, keep telling yourself that it's all in your mind.